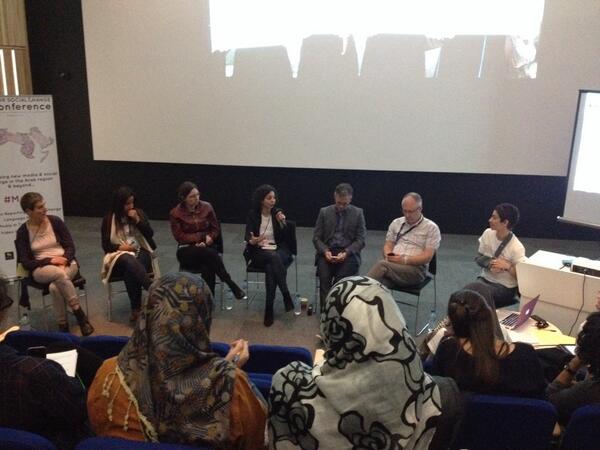 If the Syrian conflict is so heavily covered by Social Media, and therefore presumably front and centre in the public gaze, why is it also seemingly the least resolvable? Why has social media not changed anything there? That was the thrust of a question asked at the end of a great morning panel at the Media for Social Change Unconference at Birmingham City University (on Saturday 3rd May 2014).

The response was a sightly defensive one from the panel, along the lines of: the conflict is still too young to ‘prove’ that social media hasn’t worked. The better answer I think was given earlier in the day when Dr Michele Aaron argued that all this youtube footage, all this social media stuff, was ultimately little more than a kind of conflict ‘porn’. Aaron was making the point that it is well established that film and documentary of conflict often serves to do little more than make us better at looking at it. At gazing. We’re moved to tears of pity or anger but are we moved to action? How is the viewer made to feel ‘at risk’ by watching this material? It was a really strong point although not one fully explored by the panel.

My own interest was in how the citizen reporter is situated in the supply chain of journalism. How does the money flow? Are we content to effectively exploit the people who risk their lives to gather this on-the-ground compelling content. Ed Bice from Meedan and Raja Al-Thaibani from Witness.org both agreed that this was a problem. That in some way these citizens are a form of slave labour right now. Ed has a useful optimistic take in identifying the potential for micro-payment systems to ensure money flows back the other way. Raja pointed out that many citizen journalists go on to work for mainstream organisations but the result is often a softening of the hard edge they had before as they fit that organisation’s style and news values.

Dr Dima Saber, in the chair, asked the question early on: how do we research this? This actually never got answered directly. But some interesting anecdotes about journalistic practices (including one about a journalist ‘friending’ a jihadist on Facebook) made me think about the need to go back to what Journalism Studies has done well for so long: newsroom ethnographies. Of course nowadays the newsroom is dispersed: it’s the local café, the bedroom, the train, the street corner. How do we study the practices of journalism in the 21st Century in order to reveal the “invisible structures of power and recognition” (Willig 2013: 384). In doing so we might have something to say about the increasing media festishisation of the conflict in the MENA region and perhaps start to make use of citizen media in a way that make us, the audience, better at doing than at watching. .

2 thoughts on “Gazing at Media for Social Change”