They’ve published the course profile for the Birmingham Half marathon and it turns out that despite Birmingham being largely flat, the course isn’t. This is partly because we have to trudge up overpasses (Perry Barr) and pull ourselves out of underpasses (Lancaster Circus, Five Ways). 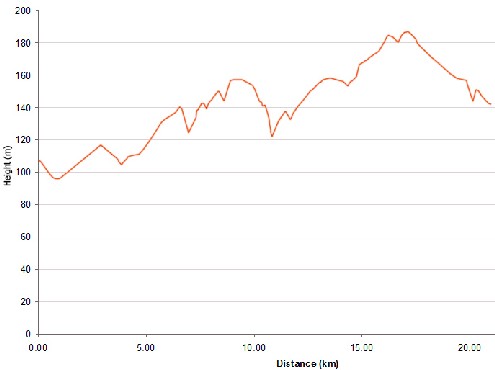 That last long dip is the 2+ mile downhill run from Bearwood to Centenary Square – presumably the blip in it is coming out of the underpass at Five Ways but it should be nice and fast if I’ve got any energy left. There are some minor route changes to the orginal published route.

Given this is the ‘Race for Climate Change’ the logistics of getting to the start are still built too much around using your car. There’s a shuttle bus from the city centre but they could have partnered with a car sharing scheme or at least, like London, put on extra regular buses and trains (Perry Barr station would only be as far from the start as Blakheath is from the London start – alas the first train that Sunday is well after the race has begun). If the race grows (9000 this year) then they’ll have to put other measures into place to encourage/force runners to use public transport.

As it stands I’ll be trying to scrounge a lift from Bournville – any offers?

One thought on “Running on the Birmingham Plateau”