An excerpt from a bit of my PhD (in progress) where I give a snapshot of Birmingham’s press history. Might be useful to a wider audience (or at least the list of references at the end might be). Any inaccuracies, then let me know.

A small number of publications (Briggs 1949, McCulloch 2004, Whates 1957) have discussed Birmingham’s early press history. Briggs’ (1949) short history of public life and the press in early 19th century Birmingham offers a detailed list of newspaper and periodicals that existed between 1800 and 1835.

The Birmingham Argus operated from 1818-19 and was a reformist paper whose publisher – like many others whose political periodicals suddenly became subject to stamp duty in 1819 (Curran and Seaton 2003: 6) – was imprisoned following the government’s suppression of the radical press at that time (Briggs 1949: 25). Other titles with a reformist of radicalising agenda were just as short-lived: The Selector or Political Bouquet (1819) and The Birmingham and Coventry Free Press (lasted for just 6 weeks during 1830) to name but two. 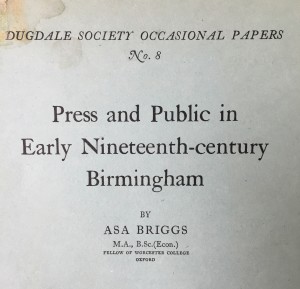 Briggs makes the point that it was the arts, theatre specifically, that was in part responsible for the appearance in print of a more dissenting, politicised voice (Briggs 1949: 21-23). Publications such as Birmingham Review, Theatrical John Bull, The Mouse trap (all 1824 according to Briggs) were strident in their condemnation of their rivals and used theatrical and literary criticism as vehicles for wider commentary on politics and society. Briggs notes: “the discussions about theatre were important, not only because they gave rise to a spate of new periodicals, but also because they launched many local writers into pamphleteering and newspaper work for the first time” (Briggs 1949: 23).

Brake and Demoor’s guide to the 19th century press (2009) also lists some early radical titles operating out of the City after the period covered by Briggs. The Birmingham Journal (1825-69) had a reformist agenda until it was sold in 1844 and its new owner “moderated the paper’s politics” (Brake and Demoor 2009: 56). It subsequently, in 1869 merged with the Birmingham Daily post (still operating in 2016 as The Birmingham Post).

Suburban papers
The growth of Birmingham’s suburbs in the late 19th century saw the emergence of newspaper titles focused on smaller localities (Harborne, Handsworth Balsall Heath, Aston, all had newspapers from the late 1870s and 1880s). This was no doubt helped by improved literacy rates, the growth of Birmingham’s middle classes and the repeal of the various duties on newspapers in the mid 19th century.

The Newsplan project, which in the 1980s sought to ‘save’ the UK’s newspaper heritage through a process of cataloguing and microfiching existing collections, offers rich insight into the amount of publications operating at this ‘hyperlocal’ level. A UK-wide project initiated by the British Library, Newsplan’s aim to catalogue and preserve local newspaper collections was undertaken on a regional basis. Tracey Watkin’s report (1990) into the work undertaken in the West Midlands provides a comprehensive list of Birmingham papers operating at both the city and suburban level.

The report is a record of newspaper holdings rather than a record of the publication dates of the newspaper but one can infer from the holdings the longevity of the titles. It is largely a record of the commercial daily or weekly press although the listings sometimes includes titles that stray outside of the definition of a newspaper (such as the Selly Oak Clarion, “a monthly political magazine” from 1937, Watkins 1990: 202). The report rejects including community newspapers for its listings (Watkins 1990: 14) but does usefully list such publications where there are British Library holdings for them.

It would be safe to say that much like elsewhere in the UK, there is a rich history of titles operating at ward or parish level during the late-19th century until the mid-20th century. After this point, for the most part, such titles either stop publishing altogether or prolonged their existence for a short period by covering larger areas (for example, the Kings Heath Observer is recorded as having holdings from 1932-1964 before it became the Kings Heath and Kings Norton Observer until 1968 when one can infer from the lack of holdings that it closed, Watkins 1990: 148).

Over the period of the late 20th century, as elsewhere in the UK, there was an inevitable shrinking in the number of Birmingham’s newspaper titles. Only the Great Barr Observer and the Sutton Observer exist as localised titles. That these titles are now owned by the same group that own the city-wide Birmingham Mail and Birmingham Post, is also part of a national trend. As Curran and Seaton have noted (2003: 75-80), the post-war period saw most small independent local titles, or small groupings of titles, becoming part of national groups: “the top five publishers increased their proportion of regional evening paper circulation by over half between 1947 and 2002” (Curran and Seaton 2003: 75).

Alternative newspapers in the 1960/70s
Whilst the Newsplan project was dismissive of the value to archivists of community-level publications, it is possible to gain a good understanding of the flourishing of community and alternative publications that emerged in the late 1960s.

There is a good account kept of the alternative press in this period (see for example, Royal Commission on the Press 1977) and Birmingham was as well-served as any other city by alternative news publications in the late 1960s and 1970s. John Noyce’s Directory of Alternative Periodicals (1979) lists 34 separate alternative and community publications as coming out of Birmingham during 1965-1974. Although only a modest number (5) cover suburban areas it is likely there were more that Noyce’s desk research simply failed to bring to light.

One such publication is discussed in David Parker and Christian Karner’s article (2011) on the Saltley area of Birmingham. They highlight the impact of the community newspaper Saltley Gas (1972-79) in the context of wider civic activism at this time:

“The practical impact of the information in Saltley Gas about housing rights, and the work of the CDP [Community Development Programme] researchers and local activists, helped save many of the properties in the side roads of Alum Rock from demolition as the end of their ninety-nine-year leases approached. The site of the informal summer adventure playground, Norton Hall, was brought back from disuse, and today is a busy family and children’s centre which owes its existence to the local residents who were energised by Saltley Gas and related civic activism in the 1970s.” (2011: 302)

Another Saltley newspaper was the bilingual (Urdu/English) Saltley News (1974-76). The record on its archive suggests that other local publications existed in the same period:

“Before it appeared there were already a number of community newspapers in Birmingham such as Sparkbrook’s ‘Spark’ and Lozells’ Trapeze which reflected the activities and concerns of people in their respective parts of the city. Saltley News was different in that it was to become the city’s and Britain’s first local community newspaper in Urdu.” (Dar, Date Not Known)

We shouldn’t be surprised at such a flourishing of local titles at this point, as Tony Harcup makes clear in his book Alternative Journalism, Alternative Voices (2013), Britain was in the midst of something of a boom in the late 1960s and early 1970s with regard to community newspapers: “an alternative local press was springing up in towns and cities across Britain, challenging the social, political and journalistic conservatism of mainstream media” (2013: 33).

Writing in the midst of this ‘springing up’ in his 1974 bibliographic guide, John Spiers (1974) is equally effusive in his praise of the alternative local press, regarding them as: “the genuine, unbought voices of their communities” (1974: 21). Spiers’ guide gives a precis of the Birmingham-wide publication Street Press (1971-73) and quotes from its ‘autobiographical note’, a polemic clearly intended to differentiate the publication from the mainstream:

“If you believe implicitly in the politics of the established press, you won’t like what you see in the pages that follow. We have produced a critic’s paradise – a jungle of thoughts and feeling which don’t pretend to be objective. There is no fat wad of hypnotic advertising and we’re not geared to offer the kind of services that the national and local dailies bring to your home” (in Spiers 1974: 21)

The report into the alternative press by 1977 Royal Commission for the Press (1977) also saw value in Britain having a vibrant alternative local press, stating that: “the community press performs an important function” (1977: 49). However, it noted the difficulty in accurately gauging the size of the sector. Instead it made the decision to focus on one area, Leicestershire, where it found there were 22 newspapers operating in rural areas (1977: 50). The Commission observed that county council officials: “often appeared to ignore the community newspapers or regard[ed] them as a nuisance” (1977: 51).

The newspapers were a mix of paid-for and free publications, with the latter often delivered door-to-door. Whilst the Royal Commission didn’t produce any data on the specific localities covered by the newspapers (or indeed their names), taking a localised approach to understanding the role of alternative and community publications in media ecologies remains the most sensible approach.

Royal Commission on the Press (1977) Periodicals and the Alternative Press. H.M. Stationery Office.