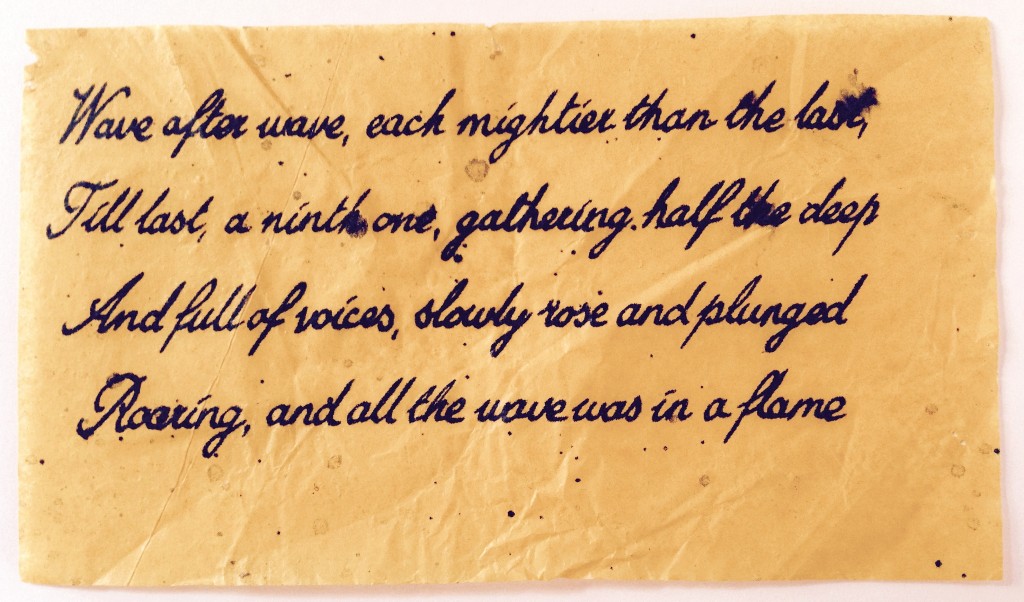 During the interval of the Kate Bush concert I’ve just been to I found myself on my hands and knees on the floor, picking up the scraps of confetti (pictured) which shortly before had been propelled over the audience as part of the climax of the first half of the concert.

I wasn’t alone in doing this. In the aisle I was in there were about half a dozen of us doing the same thing, furiously stuffing handfuls of the small yellow sheets in our pockets as we went.

What kind of madness was this?

I was encouraged to participate in this presumably nightly ritual of confetti gathering by a woman called Sally who had been standing in front of me during the first half of the concert. Sally was very much a Kate Bush superfan. This was her tenth visit to see Kate on this tour and she wasn’t shy at imparting useful insider knowledge. “As soon as the lights go up for the interval, go for it. Aim for the middle aisle,” was her advice on confetti collection. In her mid-50s, slight, and with a wonderful, tactile hands-on manner, Sally was at pains to regularly provide me with constant reassurance that the experience was going to be as good as I hoped it would be.

Her ongoing commentary on the first half of the gig was refreshingly instructive rather than intrusive, strewn with insights as to Kate’s whereabouts ay any one time: “she’s just stage-right, it’s okay, she comes back in a moment, and then it’ll be amazing, watch.”

Sally had spent all day in the standby queue to acquire her tenth Kate Bush ticket. Pete, another multiple-attender and a co-queuer of Sally’s, came to check on her several times before the start to compare notes on their view and remind each other of the show’s upcoming highlights. John, behind me and sporting a Gary Numan t-shirt, was on his third concert, and during the interval we would be joined by the surely-too-young-to-be-a-fan Jane.

All of us were lined up against the side wall of the Hammersmith Apollo as far down as we were allowed to stand (about 12 rows from the front of the stage). Jane arrived from her seat in the circle just before the second half began. She had a card and flowers ready to give to Kate if she got the chance. Her plan was to head to the front of the stage during the final song and politely (“I’m not going to rush at her, honest”) pass the flowers Kate’s way. Jane was on her third gig and, like Sally, had been queuing since before lunch for her ticket.

Amongst this group of clearly devoted Bush fans I felt like a fraud. I was in this spot because the ‘rear stalls standing’ ticket was the cheapest I could get. I have a real fondness for Kate Bush but am I a ‘fan’? Pressing refresh on a ticketing website for 20 minutes on a Friday morning in March is not the same as coming to West London and waiting all day at the venue in hope of getting a return.

To some extent I felt a kind of critical distance to this group. I could feel myself observing them. I felt like an ethnographer might feel. I imagined myself writing something very much like this article where I pick apart the habits of the ‘superfan’ and subtly tempt the reader to ridicule Sally, Pete, John and Jane for their obsessiveness, perhaps in that same predictable way that the press all too readily do.

But that’s not what’s going to happen here.

As the first half ended Sally turned to me to tell me again how amazing the whole thing was. Realising that I was trying and failing to respond, she reached her hand out to my shoulder and said: “it’s good to see a man get emotional.”

I wasn’t so much crying as doing that thing that men of my age do: use every muscle in our face to prevent the physical evidence of crying from actually appearing. Tear-free maybe, but my contorted features had given the game away. I may not have queued all day for a ticket, I may have a few gaps in my Kate Bush record collection, I may not (in fact, do not) own a Kate Bush poster or t-shirt or mug or keyring or have an embroidered cushion with her face on it; but my emotions caught me off guard as Kate sang ‘The Morning Fog’, very much a song where the loveliness is turned up to eleven.

It was a couple of minutes before I could compose myself enough to begin my frenzied search for the confetti. From that moment any sense of critical distance had gone (and what a nonsense to think like that in the first place). By the time young Jane arrived I was not so much the wry observer but the co-conspirator, feeding her tactics to ensure she got those flowers in Kate’s hands. Let’s call this: Operation Kate Must Get Jane’s Flowers (OKMGJF).

OKMGJF began with a sudden movement to the front of the stage at the beginning of the last song, Cloudbusting. I gave the command: “go, go now,” whilst John played a path-clearing role for Jane as he took the lead and the pair of them arrived right at the front of the stage. I was a little way back and thought the moment was lost as Kate said her goodbyes downstage centre, too far from where they were on the right.

But then, just as she was leaving the stage, I saw Kate reach down and reappear holding Jane’s Flowers aloft. OKMGJF had triumphed. As we exited, slightly dazed by the operation’s complete success, we all congratulated ourselves on a job well done but in the glare of the house lights we felt a sudden uncomfortableness and without any goodbyes we shuffled off.

I’ve always been slightly jealous of academic colleagues of mine whose research involves analysis of aspects of fan culture, particularly popular music fandom. By and large they seem to be talking about their own fandom and its associated behaviours and then make larger claims about the wider relevance of such practices (in relation to issues of gender, race, politics, capitalism etc.). Their starting point, whether they foreground it in their writing or not, are the moments of pleasure they feel in enacting their fandom. Such starting points involve the sensory: hearing the music, pushing your way to the bar at a gig, having Sally reassuringly touch your arm. They also involve habits and routines that are to a degree, pre-cognitive. My own habits usually relate to a set of movements of the body designed to suppress outward expressions of enjoyment (there’s maybe a slight tapping of the foot).

My point here is that whilst popular music studies is having a great time as it goes to gigs, scrambles around on the floor for confetti and writes research papers, over in other aspects of culture it’s all po-faced seriousness and not a tear in sight.

It’s not uncommon to find the researcher as participant in ethnographic studies of alternative media or community journalism but it’s harder to find the sensory discussed at all. It’s a discussion of texts or networks that tends to dominate. Yet when I undertake community journalism where I live (in Bournville in the UK), it’s the sensory aspects that dominate. The smell of chocolate permeates the air, it’s in your nostrils reminding you of everything from the lived experiences of the factory workers to the threat to the very future of the smell as a result of Cadbury’s takeover by Kraft.

As Sara Cohen’s excellent 1993 essay reminds us, popular music “is human activity involving social relationships, identities and collective practices”. So is journalism. Cohen’s interests are like mine, an interest in “practices and processes rather than upon structures, texts or products.”

So my trip to see Kate Bush ultimately made me think about the sensory encounters we have as researchers with the practices we feel passionate about. Bound up in the sensory are emotions, and too often we use the language of research or the methodological traditions of our subject domains to do as I do and contort ourselves rather that let our real feelings show.

One thought on “Amongst the Kate Bush superfans — an ethnographic reflection”