Cross-posted from The Centre for Community Journalism

I’m about to start my sixth year of running a hyperlocal blog for the sleepy suburb of Bournville in Birmingham. It’s timely then to reflect on what I’ve learnt over the years as both practitioner and researcher.

In fact, it’s especially timely as I’m close to finalising a house move that would take me over the border to a neighbouring suburb. Will it be possible to carry on as Bournville’s local news blogger if I don’t live there?

I’ve written 397 of the 479 articles on bournvillevillage.com since the blog began in the summer of 2009. It was January 2010 that I took over from Hannah Waldram as she headed off to London to work for The Guardian (she’s now at Instagram). 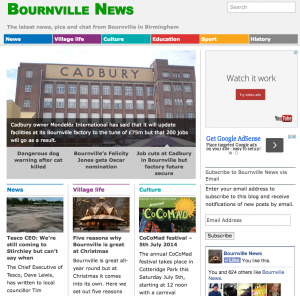 The difference between Hannah and I is that she is a fully trained journalist and I am most certainly not. But that’s not to say that I can’t do journalism. Indeed, as the academic John Hartley (in his 2009 book ‘The Uses of Digital Literacy’) has argued: ‘everyone is a journalist’. Hartley’s point is that there’s no actual barrier to participation in journalism as a practice.

Obviously journalism is full of committed, trained, brave professionals but that doesn’t stop me, the relatively untrained (I did a couple of semesters of ‘news writing’ at Uni), writing 379 articles for a local news website.

So that’s one thing I’ve learnt over the years: that journalism isn’t the preserve of journalists.

It is this aspect that most interests me from a research point of view. For having started out as someone who just quite liked the idea of writing about his local area (and who couldn’t bring himself to say no when Hannah asked me to take the blog over), I am now coming to the end of a near three year research project that looked at the ‘creative citizens’ who run hyperlocal websites across the UK.

And what we’ve found in that research has surprised me. Given the majority of ‘hyperlocalists’ are as lacking in training as myself, it’s impressive to see the volume of investigatory work and the holding of local power to account that happens.

In our extensive interviews we found that hyperlocals are more often run on the basis of goodwill and a kind of civic commitment than a desire to make money and sustain employment. That might well mean that hyperlocal’s future is a little precarious should it not find a way to get the same injection of funds that other local news providers get (many local newspapers get state funding via statutory notices and Local TV gets BBC funding).

But you can go pretty far with goodwill and a simmering desire to pick away at local injustices. I don’t think I’ve been as effective as others in that space but I’m proud of the stories I’ve written.

My problem now is what happens next if I move from the quiet of Bournville. Anyone fancy the sleepiest job in hyperlocal?