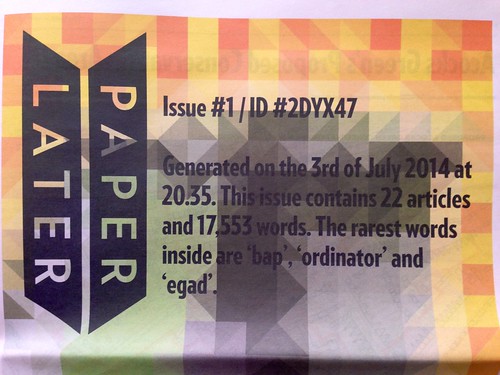 I have just launched a new newspaper for Birmingham. It has 24 pages of fantastic original content covering news, arts, politics, sport, satire. and more. What’s more, it’s written by some of the city’s best writers.

The newspaper, printed by Newspaper Club’s new PaperLater service is a single-copy one-off edition. If you want to I can let you have my copy so long as you promise to send it to the next person who wants to read it. Eventually, I think it can make its way across the whole of Birmingham.

Why I did this: Ahead of the BBC’s recent Revival of Local Journalism conference I attempted to crowd source a list of hyperlocal-ish blogs for Birmingham (you can add to the list here). I wanted to make a point that together, these blogs covered the range of topics one might find in the local press and actually do it quite well.

Then at the end of the event I was chatting to someone (can’t recall who) who said that their mother still buys a newspaper but passes it on to neighbours when she’s read it. It often makes its way down the whole street he said.

Quite liking that idea and noticing that PaperLater had launched I thought I would see if I could turn some of Birmingham’s best blogs into a newspaper. If you’re an author of one of the articles then apologies if you’re annoyed that I printed out your article without asking.

I might write a little more at some stage about the rationale for these choices and about how PaperLater formats the newspaper (often with generous white space – which I quite like), but for the meantime, enjoy Issue 1 (of 1) of erm,: ‘Some posts from Birmingham’s blogs, printed out’.

(See more pics of the paper)

Commemorating World War I in the Village

The Sewers In Kings Heath Are Full Of Fat

NPO news in the West Midlands

The Beginings of a New Age: Curzon Street Station

“No-one should choose between heating and eating” – …

The Logic to Roy Keane Joining Aston Villa – My Old … 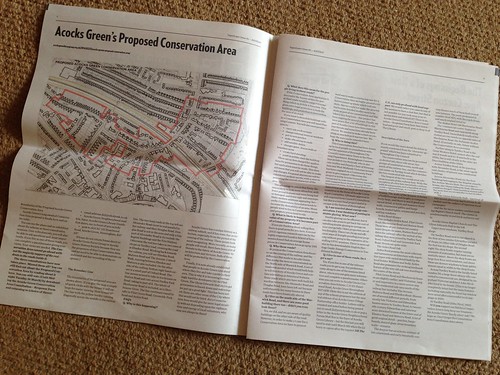