So having taken the decision to use old CDs to make a scarecrow I’ve now gone to the dusty and under-used CD shelf and made some tough decisions. Needless to say that S Club 7 (later in their career they would become just ‘S Club’) can now have all the sunshine they want as they have made the cut. Actually their CD is ideal as it shiny on one side, obviously, and white on the other. That places them very high indeed on the scary-meter.

Actually I don’t need many CDs to construct my scarecrow so the rest are made up of Travis (did we buy this? both of us deny doing so), Moby (newspaper freebie), Fat Boy Slim (ditto), Marion (mid 90s Britpop wannabes), Hard-fi (why is this man shouting at me?), Paolo Nutini (??), and The Good, The Bad and The Queen album which I have to say is awful and I hope I never have the misfortune to listen to again.

Before the weekend I hope to start construction of said scarecrow. More to follow. 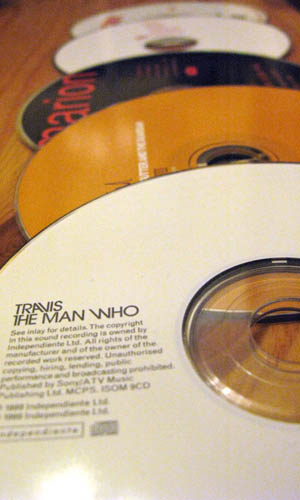