Landshare is an exciting new project with some 4iP funding behind it. Or at least I think it has 4iP funding. It certainly is 4iP in feel as explained by Adam Gee on the 4ip website.

But anyway – I think it’s a cracking idea. It connects people who want to grow stuff with people who have land to grow it on. You can also be a ‘landspotter’ – someone who knows where there is unproductive land laying fallow that could be utilised for growing food. That’s a bit like the thinking around Feastside – an idea I’d love to see kick off again (and would try to actually get to the meetings this time). Or you can be a ‘facilitator’ – someone who just wants to muck in.

I think it’s more aimed at bigger land owners rather than someone like me, an allotment holder with a plot just a bit too big for family feeding needs. I’ve registered anyway, along with 200 other ‘landowners’ from the West Midlands, so when the site launches in spring we’ll see what happens.

Actually, we could just circumvent all that and you’re more than welcome to a patch of my allotment right now. There’s a slight catch in that the back half of it is almost completely covered in brambles. But if you fancy helping me clear it then you’re welcome to a bit of it to grow some spuds or whatever. We’ll call it Daveshare.

No really, help me clear it and I’ll introduce you to the wonder of grow-your-own. It’s in Bournville, on the number 11 route.

Really overgrown bit at the back of this photo. It’s much worse than the pic suggests but not insurmountable. I’ve cleared about a quarter of it already.

We got our allotment patch in Bournville just about a year ago so I thought it worthwhile to list what we grew and how successful we were:

Overall a good start and we ate well off it, I can only hope next year proves as good. I’ll bore you with the occasional update as we progress in 2009.

Here’s a picture of a cabbage from the allotment. It’s here partly at the suggestion of Nick Booth who quite rightly thinks I should put some distance between the experience of being at the Tory party conference and the actual blogging of it.

Please admire how perfectly formed it is. It shall be eaten with next sunday’s lunch:

Just a quick post to show you that the plot is now giving up some of its goodies. The overgrown back of the plot has plenty of lovely sweet red currants and raspberries whilst the last of the new potatoes are out of the ground. The longer they stayed in there the larger they swelled compared to the first lot we dug up six weeks ago but they are also more prone to little maggots drilling holes in them. We had to chuck a few of these but will have enough for a few meals. The runner beans are coming on in their droves, not my favourite veg in the past but picked young they are delicious.

The pic below is a quick camera phone grab (not the best tool for food photography – colours are yuck) of tonight’s runner bean based dinner. It’s from the last Jamie Oliver book. He does it with fish but we made do with chicken. Tasted great though – the sauce has anchovies in it. Note the parsley which never grew very well for us in a pot out the back but is doing very well down the plot. 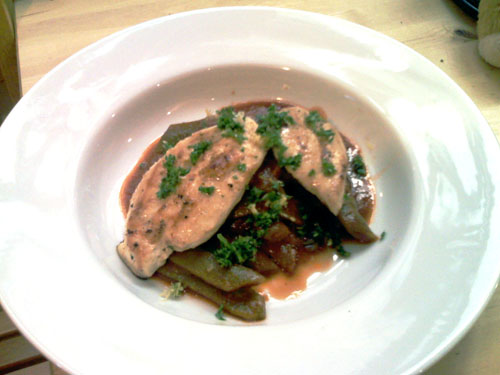 Below, how it’s supposed to look when made with beans that look like they were picked very young and a more expensive photographer not using a camera phone:

Finally got round to sorting out the other half of the front of my plot. Took me ages to tidy all the crap I’d thrown in there and of course underneath was tons of great compost. I now have two heaps and plenty of compost. Wandering down to view my handy-work next day I was greeted by a visitor christening my work. I reckon it was the same cat I’d photographed previously. 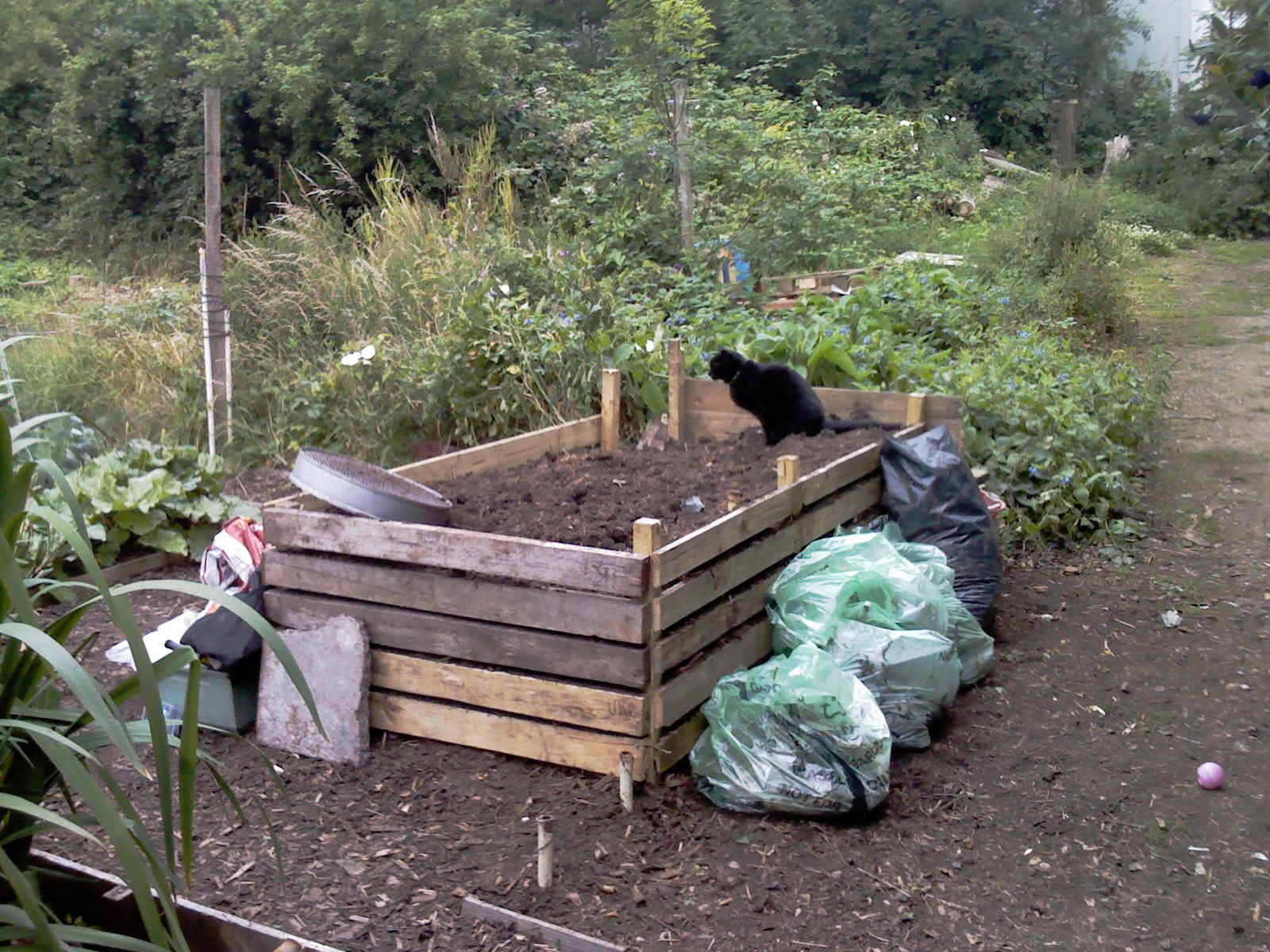 Take a look at my new spuds:

Go on, click on the picture to get the large version. They look good don’t they? They taste good as well. I only got into this allotment larky in oder to grow spuds and here are my first ones. I can’t recall what variety I planted but have got about 20 plants worth – the above being the bounty of a couple of them.