David Gauntlett‘s new book, Making is Connecting, makes for a useful read for anyone who wants to feel that their fiddling around on the web or growing potatoes or knitting scarves have meaning beyond being harmless pastimes.

Hang on, I think he means me. Well except for the knitting; I did try it the year before last but it turns out it requires accuracy and patience, two things I’m not good at. I do grow spuds though, on an allotment, a place that Gauntlett uses as a metaphor to explain what Web 2.0 is: “instead of individuals tending their own gardens, they come together to work collaboratively in a shared place” (p5, see also his video of his explanation). 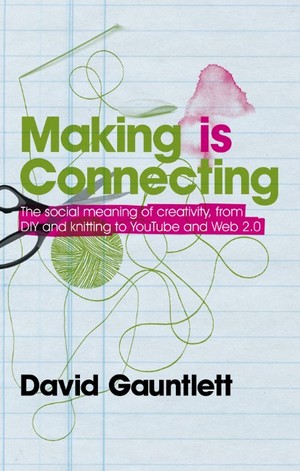 He touches on guerilla gardening (which is actual gardening, not the metaphorical kind) as one example of an activity by which people make stuff and create connections between each other. Knitting is the more developed example and Gauntlett gives us a guide to some interesting literature on the topic and charts the growing interest in DIY culture. I guess the local knitting group Stitches and Hos isn’t untypical of the re-emergence of craft in its combination of a self-consciously hipster rhetoric with a more radical underpinning of reclaiming traditionally male spaces (the pub) and re-appropriation of a pejorative term (see also Stich ‘n’ Bitch).

DIY culture could be a reaction against commercial culture, Gaunlett argues, just as John Ruskin and William Morris railed against industrialism in the 19th century (there’s a chapter devoted to their philosophies). Gauntlett’s key point is to wrestle back the notion of Creativity from being something that concerns the few who somehow have that magical ability to produce works of high art. Everyday creativity is his concern. At this point I was reminded of a presentation I saw (PDF link) by Justin O’Connor which included the line: “‘Creativity’ emerged as key value in ‘positive liberalism’ – active intervention to ensure competitiveness and innovation” – the political economy of ‘creativity’ isn’t the focus of Gauntlett’s book but O’Connor reminds us that in policy, the term is more closely associated with regeneration than the act of making and doing.

Gauntlett has been writing about the web for a long time (Web Studies, 2000) and here he draws on his experience of creating websites in the Web 1.0 era to warn against the way in which many Web 2.0 experiences are locked down in easy-to-use packaged solutions (Apple is particularly guilty he argues). These go against the principles of the web as it was conceived and I enjoyed his discussion of making things on the web, of hand-coding and continual testing. The few blogs I’ve created have all required some messing about with the code and it’s quite pleasurable to fiddle with some CSS (having never formally been taught it) and then watch as the change you were hoping for actually happens.

For a book that talks up the benefits of a Web 2.0 world Gauntlett rightly points out that we shouldn’t presume everything is rosy in the allotment. The threat to net neutrality clearly worries him as it would shift the emphasis to consumption from creativity: “then it will have become an industrial tool, and its positive potential will be destroyed” (p184). His chapter on the literature stacked against the benefits of Web 2.0 largely serves to debunk some of the key concerns but it also served to remind me that I’ve yet to get through Sherry Turkle’s ‘Alone Together’ or Evgeny Morozov’s ‘The Net Delusion: How Not to Liberate The World’. It seems the literature on Web 2.0, judging by the book titles, is diametrically opposed.

Overall this makes for an engaging read (with a very good chapter summing up Social Capital too) and Gauntlett leaves us with some key principles which he offers as tools for “thinking about everyday life, creativity, and media” (p220). Building on these principles he sets out some ‘imagined futures’ as “modest developments” rather than far-fetched scenarios. I liked the one about the future of education where the system recognises that teachers “are no longer just the holders of the ‘answer book’ but are visibly also learning new knowledge and skills in their own lives”. You listening students? I really don’t know the answers.

Making is Connecting: The Social Meaning of Creativity, from DIY and Knitting to YouTube and Web 2.0 by David Gauntlett costs about £11 – £12 in paperback.

Couple of small caveats: I have met David Gauntlett, while he was at Bournemouth University. I was part of a group of academics connected to the Centre for Excellence in Media Practice of which he was part. Also, via twitter he did directly ask me to review this book and I was happy to oblige.