Oh, I must write this down before I forget. Here’s a round-up of the things I did in and around the general and local elections in May 2015.

BBC Election Hackday – 27 April
My work colleague Paul Bradshaw put on a fantastic event for journalists (students, BBC, press, hyperlocals) aimed to producing some data-driven stories with an election theme. I found myself on a team focusing on women and the election.

My modest output for the day, with help from Sofia Casotto (she also produced an infographic of the data), was to pull together data on the number of female general election candidates in Birmingham constituencies from 1979 to the present day. 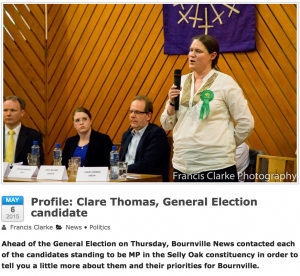 I’m struggling to find time to keep my hyperlocal site bournvillevillage.com ticking over with sufficient content so I was grateful to Francis Clarke who lives locally when he suggested writing an account of the general election husting for Selly Oak constituency and also profiled some of the candidates. Nice to have David Higgerson give a nod to this work in his election round-up.

I produced some audio:

I also found myself acting as a kind of roving reporter for the student radio station that was on air throughout the night.

I did some live streaming:
I wanted to experiment with Twitter’s live streaming service, Persicope. I had some fun with this although the streams don’t archive so I can’t show you the results (and I didn’t save the video locally to my phone). I streamed the incoming boxes on the Thursday, some results at the general count and placed my phone on a tripod for the locals count and let it stream all the results.

LIVE on #Periscope: local results at #brumvotes15 as they are announced https://t.co/a0WwXIUknJ

Overall the election was fun and I got to hang out with some brilliant students from Birmingham City University (running a fantastic news and results service on the birminghameastside.com blog) and also Pauline from newsinbrum.com who knows everyone on the local political scene and was great company across both counts.