I know this is odd but my mother and I share an unspoken bond over a newspaper. Well, unspoken till now I guess. But in all the talk of hyperlocal news on the web and the local paper here in Birmingham going from daily to weekly I thought I’d explain why the Connacht Tribune is the greatest newspaper in the world.

The Tribune is a regional broadsheet covering the county of Galway in the west of Ireland. Because it has a sister paper covering the city of Galway (the City Tribune News) it’s free to focus on rural issues and covers news from all areas of Galway, including the region that my mother is from (North East Galway). I say ‘news’ but more often, once it gets down to these smaller, more sleepy areas, it focuses on cultural, social and farming stuff. So the price of sheep in the local market sits alongside the names of the winners of the local card game tournament. Its sports coverage of Gaelic games is incredibly comprehensive as well, right down to schools level. Its coverage of deal people is second to none. Death announcement and death anniversaries take up several pages. Such things are a real feature of local newspapers in Ireland, perhaps the one income stream that’s remained steady in the face of the advertising downturn.

Overall it has a depth of coverage that would be the envy of other local newspapers. Its quite a read, as weeklies should be. And in communities where access to the web is problematic the paper version is vital for well, knowing how expensive sheep are. But for me and Mom it has a deeper resonance. For her it connects her to the area she left nearly 50 years ago and for me it connects me to her, to the place that shaped her early experiences and a place that I spent every summer holiday from the early 70s till the late 80s.

The problem at the moment is actually finding a copy in the UK. It used to be the case that finding a wide selection of regional Irish newspapers was easy, many local newsagents in specific neighbourhoods stocked them as a matter of course. Or at least they would order them in. But whatever supply chain was operating in Birmingham seems to have ground to a halt as far as the Tribune is concerned. It just seems to have dissapeared from the shelves.

But its scarcity is, if anything, making it more important to us. That we can’t get a joint fix of it until one of us goes to Ireland to get a bundle of back copies has if anything made it clear how much we value it.

Like nearly all newspapers, its website is of course rubbish, but who cares. This is hyperlocal as I understand it, something that I’ve yet to see the web replicate and kind of hope it doesn’t any day soon. First off, what a well-organised race this was. All the various races (elite men, women, wheelchair, mass) started on time, the baggage drop-off was managed well enough and I didn’t have to queue for a portaloo. Support along the route was great, especially around Bournville where obviously it helps to have Bournville written on your running vest

I came 251st in 1:27:21. A full four minutes off my best but I was pleased enough as my training drifted a little in recent weeks. A full season of cross-country over the winter should see me posting better times in the new year hopefully.

Well done to everyone that took part and especially to the masses of colleagues from Bournville Harriers. Some really impressive times amongst club members but Mel James’ 1:23:04 and 6th woman back (first in her age category) was the stand out. I think it was actually Mel’s first ever half marathon.

Here’s the map from my Garmin if you want to see how my race panned out: 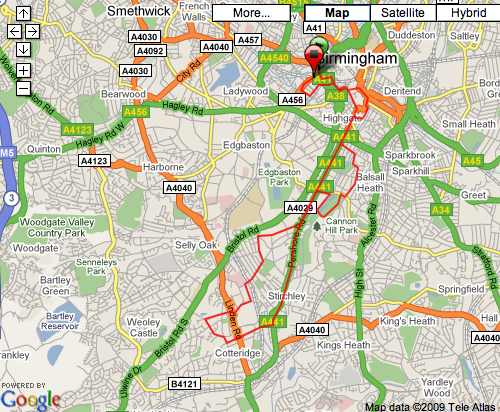