It’s almost here. This year’s Birmingham Half Marathon has over 12,000 entrants and one Paula Radcliffe. The numbers have been sent out (well mine has anyway) and letters have gone to residents along the route telling them to shift their cars the night before the race. They’re even re-tarmacing the race route within Cannon Hill Park.

My training has been a bit lacklustre. If you follow my updates on twitter then you’ll have noticed that I’ve done about 3 or 4 runs a week with a recent tail-off due to a recurring hip injury that for once buying a new expensive pair of trainers didn’t cure – it usually does, honest. It’s not bad enough to pull out of the race (lots of ibuprofen gel will help) but it means that I’m not able to push my training just ahead of having to taper.

They haven’t sent out a race guide this year in an effort to be a bit greener presumably. You can download it (PDF link) and it gives you all the details you need about baggage arrangements and start times for the IAAF World Half Marathon Championships.

Paula and the rest of the women start at 9am so they’ll be close to finishing by the time the rest of us start at 10am. As I said to my family, if they want to see Paula they’ll have to be loitering around Maryvale road in Bournville at about 9.30am. They’ll then have plenty of time to pop home, get a cup of tea, some toast, watch some telly, before I appear at the same point about 10.40am. They should actually hang around for the elite men at about 10am as that line-up is impressive.

The race is again billed as the ‘Race Against Climate Change’. Shame then that the public transport arrangements for runners seem ill thought through. There are no early local trains on the Sunday and I can’t see evidence of extra buses being laid on. In fact, where I live all the buses will presumably be diverted due to closures on the race route. The race information that goes out for the London Marathon makes it clear that taking the car is pointless and then lists all the train times to get you to the start from various points of the capital. If the race grows in numbers again then we’ll really have to address this issue. If you do go by car then there’s a document about car park closures (PDF).

If you are travelling by public transport here are some useful links:

Best of luck to all the runners. 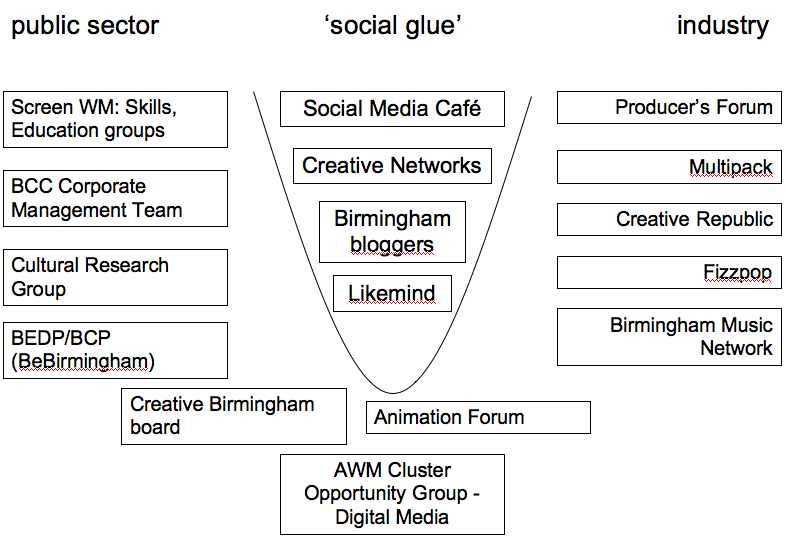 I thought I’d post up the diagram I’ve put together for a presentation I’m part of at next week’s Creative Regions seminar at Birmingham University.

The presentation forms part of a research project that myself, Paul Long and Annette Naudin, all of us from Birmingham City University, are getting our teeth into. The research seeks “to find out something about those who determine creative policy in the UK and their relationship with creative workers who are at the receiving end of policy interventions, decisions and strategies.” That quote is from Paul Long’s description of the work over on his Posterous blog. Go there to read a bit more about the context of the research.

My diagram was to merely describe that between the groupings of public sector decision-makers and sector-specific interest groups sits a kind of social, and social media, ‘glue’ that binds the two together. At some point I think we need to examine the extent to which this glue is similar to the social interaction in other industry sectors or whether it works differently in the creative industries given the speed of uptake of social media technologies.

The diagram (albeit in a slightly earlier form) seemed to cause a bit of chatter when I linked to it on twitter the other night. This is very much an abbreviated list and rather than list programmes of support I wanted to show public-sector groups that actually meet, that in some way make decisions about policy, or shape it or steer its implementation. On the industry side there’s a mix of groups that lobby (e.g. Creative Republic) and those that offer guidance/new knowledge to peers (e.g. Multipack). In the middle are those that comprise public and private sector individuals.

Chris Unitt posted a useful list that helped this and Michael Grimes reminded me of his work in progress in making sense of who’s who in Brum which helped also.